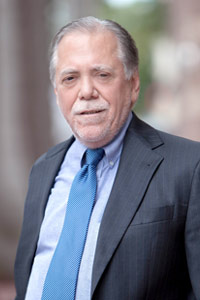 Mr. Evans is a graduate of the University of California at Los Angeles (UCLA), and the University of California, Hastings College of Law, Following graduation, he was employed as an associate by the largest law firm in Latin America, Pinhero Neto & Cia. located in São Paulo, Brazil.  Brazil at that time was undergoing a period of great economic expansion and 50% or more of his work was devoted to representing large banks such as Citicorp, Bank of Boston, Bank of London and South America, Chase Manhattan Bank, Manufacturers' Hanover, Bankers Trust and Wells Fargo Bank, among others, in negotiating and documenting financings earmarked for infrastructure projects and guaranteed by various agencies of the Brazilian government.  Other work involved direct foreign investment, distributorships and agencies, franchises, transfer of technology and related tax and labor matters.

While working with Pinhero Neto, Mr. Evans, was hired by Curtis, Mallet-Prevost, Colt and Mosely of the New York bar.  Curtis Mallet is a firm started in 1830 and is heavily dedicated toward practice within the legal systems of Latin America.  The work at Curtis Mallet was concentrated upon assisting U.S. corporations which were investing directly and indirectly in all of the countries of Latin America.  There was a heavy emphasis on acquisitions, joint ventures and financings and all elements involved in conducting business in a foreign country. During that time, Mr. Evans normally spent half of the year in New York and half of the year in São Paulo where he assisted in starting a branch of the New York office to counsel various Brazilian clients, including one of the country's largest state-owned steel manufacturing companies.

While at Curtis Mallet Mr. Evans was hired by Pepsico, Inc. as associate counsel for Asia and Latin America, working out of the company's headquarters in Purchase, New York.  That work involved mergers, acquisitions, financing and franchising and entailed the supervision and management of work by local counsel in various countries.  While at Pepsico he lived for one year in Mexico working on major legal and political problems the company was having with the government of that country, including an Amparo legal action brought in the Supreme Court of Mexico against the government of Mexico, challenging trademark legislation adopted by the government known as the law of “Marcas Vinculadas”.  The suit against the government of Mexico was joined by many large multinational corporations.  The suit was settled successfully, avoiding a trade showdown between Mexico and the United States.

After coming to Miami, Mr. Evans’ practice has included assisting inbound foreign interests with their investments in the United States, however, the practice still focuses on negotiating various joint ventures in Latin America, as well as counseling and assisting corporate entities, mostly from Latin America, to assist in establishing corporate and financial structures allowing them to successfully conduct global business.

At the beginning of 1988 and for the next four years, Mr. Evans dedicated a large amount of time as general counsel, vice president and shareholder of Carolyn Properties, Inc., the managing joint venture partner of a general partnership consisting of Latin American and Japanese investors established to develop a luxury hotel on Miami Beach for ANA Enterprises, Ltd., the hotel subsidiary of Japan's largest airline, All Nippon Airways.

In 1985, Mr. Evans was among twelve individuals who were invited by the Ministry Justice of the People’s Republic of China to spend a month studying and consulting on China’s new commercial laws. Mr. Evans has maintained a personal friendship with the Minister of Justice, now retired, and is still involved in counseling in connection with commercial ventures in China.

Mr. Evans continues to represent many foreign businesses, high net worth individuals and industrialists with respect to their private investments in the United States, including the establishment and financing of offshore corporations, foundations and trusts.  Mr. Evans also dedicates a large amount of time advising Brazilian oil related interests in connection with corporate and financial structures for the development and construction of offshore drilling platforms used to access Brazilian oil reserves.

Mr. Evans has authored articles that have been published in domestic and international journals concerning legal aspects of doing business in Latin America, and has been invited to speak at various legal conferences, both in the United States and abroad.

Mr. Evans is admitted to practice law in the States of California, Florida and New York, and has been AV Preeminent peer-review rated, the highest rating available for legal ability and ethical standards, by Martindale Hubbell since 1983.  In addition, he has been chosen to be listed by the worldwide Directory of Preeminent Lawyers in the category of International Law.