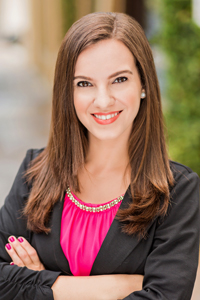 Bachelor of Arts, Majors in Political Science and Psychology, University of Miami (2013)

Kelly M. Scott is an associate attorney primarily concentrating in the areas of estate planning, probate, corporate law, and other general transactional services.

Ms. Scott received her Bachelor of Arts in Political Science and Psychology from the University of Miami in 2013. Following her graduation, Ms. Scott interned for the Honorable John W. Thornton in the Eleventh Judicial Circuit’s Complex Business Litigation Division.

Ms. Scott then received her law degree from Florida International University’s College of Law in 2017, where she graduated valedictorian of her class. She was a Betty G. Reader Scholar, and received CALI Excellence for the Future Awards in various courses including Wills and Trusts, Estate Planning, and Elder Law. During law school, she worked as a summer law clerk for the Miami-Dade County Attorney’s Office. She also completed a summer internship for the Honorable Maria M. Korvick, administrative judge of the Eleventh Judicial Circuit’s Probate Division.

Ms. Scott served for two years as the co-chair for the College of Law’s Public Interest Auction, during which time she and her team helped raise over $12,000.00 in scholarship funds for law students working in public interest fields. Ms. Scott was also a member of FIU Law’s Trial Team, where she competed in the 2016 Zehmer Memorial Mock Trial Competition. Her team won first place at the competition and Ms. Scott was awarded the title of Best Advocate.

Ms. Scott was recently admitted to the Florida Bar in 2017.