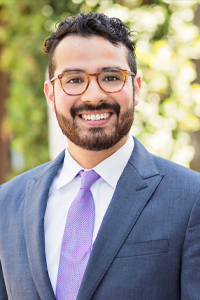 Andrew G. Portillo is an associate attorney primarily concentrating his practice in the areas of tax and corporate law and other general transactional services.

Mr. Portillo received his Bachelor of Arts in English from Florida International University in 2013.  Mr. Portillo then received his Juris Doctor from DePaul University College of Law in Chicago, Illinois, in 2016.  Mr. Portillo completed a certificate in taxation during his time at DePaul, for his focus on legal taxation classes, and received a CALI Award for Excellence in Federal Income Tax.  During his time at DePaul, he worked at a defense firm and was a summer intern for the Honorable Judge Spencer Eig, Circuit Court Judge for the Eleventh Judicial Circuit of Miami-Dade County.

Following his graduation, Mr. Portillo received his Masters of Laws in Taxation from the University of Miami.  He was awarded the Martin J. Nash Scholarship for his performance in the graduate program.  After receiving his LL.M., Mr. Portillo worked as a tax consultant for a large, global professional services firm, where he assisted in the planning and implementation of tax efficient structures for foreign and domestic companies, as well as high-net worth individuals.  In addition, Mr. Portillo is proficient in domestic and offshore tax compliance.

Mr. Portillo was admitted to The Florida Bar in 2017.